Top Lessons We Learned During Season 6 of Bar Rescue

Bar Rescue is a binge-worthy reality show where Jon Taffer and his team of experts visit bars around the country that are drowning in debt and struggling to stay afloat. The show follows Taffer as he uncovers underlying problems and gives owners and staff some tough love and tries to help them turn their business around. During the course of six seasons, there have been some reoccurring themes, which we have compiled into a list of top lessons that you can use to start improving your own business.

1. Do not fight in front of the customers. Yelling at staff is a great way to make a terrible impression and ensure that new customers don't return. If you treat employees with respect, they will be more likely to go above and beyond and show pride in their work.

2. Have a clear management organization. Everyone should be aware of their role and responsibilities. This allows managers to hold people accountable and avoid having any critical tasks fall through the cracks. A lot of owners make the mistake of trying to create a family type environment for workers. While this is a nice sentiment, it can create a situation where there is a lack of leadership, and poor performance is never met with any consequences. Being a compassionate and flexible manager is one thing, but employees still need structure and strong leader.

3. Cleanliness is next to godliness. A sure sign that owners have given up is a dirty kitchen and bar area. Again and again, Taffer visits establishments with expired food, moldy refrigerators and drink lines that haven't been cleaned in ages. No one likes to clean, but if you aren't doing the basics and setting a standard for cleanliness, then everything else will fall apart pretty quickly.

4. Don't drink on the job. One would think that this would be an obvious rule, but it seems that a lot of owners and employees treat the establishment like their own personal bar. Throughout many episodes in season six, participants are filmed showing up to work drunk or taking shot after shot with their customers. Not only does this set an unprofessional tone where anything goes, but it is also a surefire way to lose money.

5. Take inventory and pay attention to pours. A "relaxed" management style where inventory isn't a priority can lead to all sorts of problems. One bar was caught with items that had been expired for over a year. They were actually serving up margarita mix that had been sitting on the shelf for more than twelve months!

Other featured bar owners were guilty of encouraging their bartenders to over-pour drinks. In their minds, getting everyone drunk was a great way to create happy customers. Instead, they ended up with belligerently intoxicated servers and patrons, which turns into a dangerous situation where the bar can be held liable.

Finally, being heavy handed with the drinks and allowing employees to drink at will without taking inventory eats away at the bottom line. Without a clear idea of how much of different beers and liquors are being consumed, there is no way to effectively manage orders, track revenue and increase profits. That is exactly why Taffer recommends Sculpture Hospitality inventory management software. Technology makes tracking inventory easy and hassle-free so that bars can operate more efficiently. 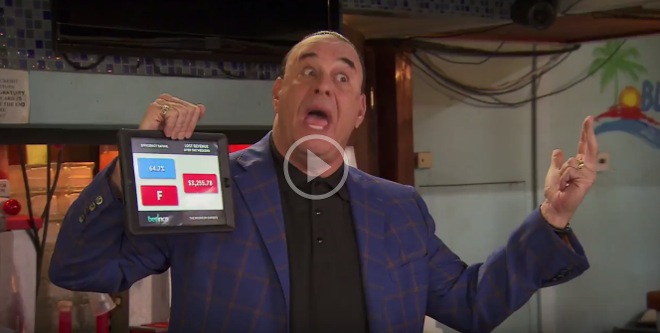 For six seasons, Taffer has helped to turn around failing bars by teaching owners/managers these lessons. While not everyone listens or keeps up with new, effective habits, the key to running a successful bar isn't a mystery, it takes strong management and established organization.